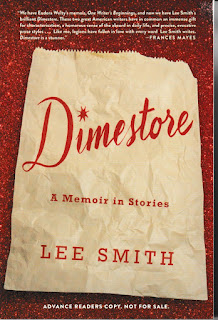 I have never read any of Lee Smith’s novels, but I have a read a few minor things written by her.  I am not sure why this is, but when I received an advanced readers copy of her memoir, Dimestore, -- her first work of non-fiction -- I decided to discover what I was missing.  And I was missing a lot!  She is a clever, smooth, and interesting writer, and this memoir became so much more than a story of her growing up and becoming a writer.  The first part of the book covers that, but the later chapters examine the writer in herself and how a reader can apply that to her daily writings.

According to the dust jacket, Lee – who lives in Hillsborough, North Carolina -- began to write stories at the age of nine and sold them for a nickel each.  As an adult she has 17 works of fiction and has won numerous awards, including “an Academy Award in Fiction from the American Academy of Arts and Letters.  Her novel The Last Girls was a New York Times best seller and won the Southern Book Critics Circle Award.  She talked a lot about this book, and I think I will get a copy of that novel next.

Lee talks about her early desire to be a writer, and the autobiographical nature of one of her characters.  She writes, “Although I Don’t usually write autobiographical fiction, the main character in one of my short stories sounds suspiciously like the girl I used to be: ‘More than anything else in the world, I wanted to be a writer.  I didn’t want to learn to write, of course.  I just wanted to be a writer, and I often picture myself poised at the foggy edge of a cliff someplace in the south of France, wearing a cape, drawing furiously on a long cigarette, hollow-cheeked and haunted.  I had been romantically dedicated to the grand idea of “being a writer” ever since I could remember” (63).  Lee was lucky to have discovered her passion so early and had the grit and the talent to carry through to success.

Lee tells a story about meeting an elderly woman who loved to write, and, as Smith found out, she had stumbled on a truly talented writer.  One day, they went for a walk in rural Virginia.  She writes, “‘Here honey,’ she said, leaning over to pick up a buck eye as we walked back beneath the sunset sky.  ‘Put this in your pocket.  It’s good luck.  And get your head out of them clouds, honey.  Pay attention.’  We went back to sit on her porch, talking to everybody that came by.  We had potato chips and Moon Pies for dinner. // I’ve been trying to pay attention ever since, realizing that writing is not about fame, or even publication.  It is not about exalted language, abstract themes, or the escapades of glamorous people.  It is about our own real world and our own real lives and understanding what happens to us day by day, it is about playing with children and listening to old people” (91).

This pleasant memoir is as enjoyable as a memoir can be.  If you are interested in all the ins and outs for the art and craft of writing, Lee Smith’s Dimestore, is a great place to begin your own journey.  We all have stories we share all the time.  Get yourself a pencil or a pen or a computer, sit down, and write.  5 stars