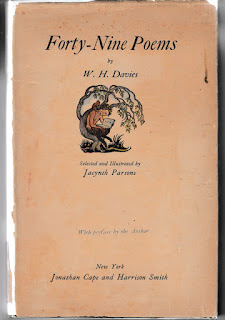 I have often told a tale of finding a book, which delights me to no end.  On a recent trip to Tampa, Florida, I found a wonderful bookshop – The Old Tampa Bay Bookstore.  The first day I spent all my time in the fiction section, and as I left that day, I saw a large section devoted to poetry.  I had to come back the next day, and my decision was rewarded with a little treasure by a poet I which never crossed my “Bookdar.”  Forty-Nine Poems by W.H. Davies, selected and illustrated by Jacynth Parsons took me back to my elementary school days.

According to Wikipedia, William Henry Davies was born on July 3, 1871.  He was a Welsh poet and writer.  He spent a significant amount of time as a tramp or a hobo in England and the U.S.  W.H. Davies, as he was known, became one of the most popular poets of his time.  He wrote a number of volumes of poetry as well as an autobiography.  He died September 26, 1940 in Nailsworth, U.K.

The first thing that attracted me to the book were the wonderful color illustrations by Jacynth Parsons.  He began his career as an illustrator at the age of 16.  He died in 1992 at the age of 81.  His work reminds me of a book of poems we read in about the fifth grade.  His illustrations are soft, gentle, and filled with little creatures and people inside trees and clouds.  Most are in black and white, but the hand tinted drawings are even more enchanting than the others. 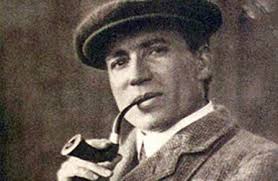 Here is another with the moon emerging from the clouds as a woman floating above the trees.  He writes in “The Moon,” “Thy beauty haunts me, heart and soul, / Oh thou fair Moon, so close and bright; / Thy beauty makes me like the child, / That cries aloud to own thy light: / The little child that lifts each arm, / To press thee to her bosom warm. // Though there are birds that sing this night / With thy white beams across their throats, / Let my deep silence speak for me / More than for them their sweetest notes: / Who worships thee till music fails / Is greater than thy nightingales” (29).

This slim volume will entertain on a beautiful Texas spring morning.  While some of his work might be hard to find, several are available.  Forty-Nine Poems by W.H. Davies would be more than well-worth the effort.  5 stars.