Ordinarily, I do not care for modern versions of Shakespeare -- Hamlet in 20th century New York, or Victorian England, and so on.  When I read Dunbar by Edward St. Aubyn’s version of King Lear, I was a bit apprehensive.  Lear is my favorite Shakespearean tragedy, and I did not want to even think about what it might be like.  Edward St. Aubyn is an English author and journalist.  He has authored eight novels.  In 2006, he was nominated for a Booker Prize.  That seems like a more than adequate background for Dunbar.

My reading hardly took me to the tenth page when a number of references to the “Crazy Old King” came to my attention.  As I read, I continued to mark these little nuggets.  Only a few items were manipulated beyond the casual reader’s notice.  Fortunately for one character, he did not suffer the fate of Gloucester at the hands of the evil Duke of Cornwall.  No spoiler alerts here -- all the fun is in matching the characters in the two stories.

Here are some of those quotes.  Who do you think they represent? “‘You can’t cling to the trappings of power, without the power itself.  It’s just,’” he paused, trying to avoid the word, but eventually letting it fall on him from the plaster above, “‘decadent.’” (3).  Try this easy one, “Oh, God, let me not go mad” (5).  Or, “‘he turned his daughters into his mother!’”

Her is an interesting passage. St. Aubyn writes, “‘Grilled fish,’ said Garry, chuckling. ‘That always gets me’. // ‘He wouldn’t have been allowed one of your delicious sauces,’ said Peter, ‘because he was on a diet.  That was a quotation from something he said to a waiter in Los Angeles, when he was having lunch with Gore Vidal.’ // ‘So, it’s a bit of history, then,’ said Garry. // ‘I’ll let you in on a little secret, Garry: everything is history.  By the time you notice it, it’s already happened.  That famous imposter, “the present,” disappears in the cognitive gap.  Mind the gap!’ cried Peter, like a stationmaster warning passengers as train doors open” (33). 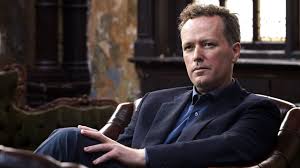 Dunbar is in a remote asylum with some henchmen trying to find and kill him.  He learns of the plot, and manages to escape. St. Auybn writes, “He would get everything back and, with his power restored, he would punish his wicked daughters and leave the empire to Florence.  He had always known that he was supposed to love his children equally, but couldn’t disguise that it was Florence who charmed and delighted him.  She had inherited her mother’s beauty as well as her disarming sympathy.  Just by listening to him, she could make the knots he tied himself in spontaneously loosen and unravel.  She didn’t exercise this effect self-consciously; it was a natural phenomenon, like ice melting at a certain temperature.  Apart from her virtues, he loved Florence simply because she was Catherine’s daughter, and Catherine was the great love of his life, a love, or at least an image of love, immortalized by death, sealed off from decay and habituation, from the mundane forces that turn admiration into tolerance, and tolerance into irritation.  He could see now, in this moment of lucidity, that after Catherine was killed in the car accident, he had clung to Florence in a way that may have contributed to her desire for independence and her decision to have nothing more to do with his business” (37).  Something of a major turning of the tables there, but this thought process of Dunbar’s nicely fits in with Lear’s madness, and his moments of lucidity.

All in all, Edward St. Aubyn’s version of King Lear – set in the 21st century – is a worthy descendent of the Bard of Avon.  If you have even a high school memory of Lear, Regan, Goneril, Cordelia, Edgar, Edmund, Gloucester, Kent, Albany and Cornwall, this can be a most enjoyable read in a mere 244 pages.  5 stars!