As I resume my tour of the Brontë novels, Wuthering Heights, by Emily Brontë, is next. It was her first and only novel.  It is believed Charlotte destroyed—at Emily’s direction—a novel in progress upon her death.  A journal of Emily’s has tantalizing letters in the remaining fragments of torn out pages, and some poetry and scattered diary entries are all that remain.  Emily died in 1848, and in 1849, Charlotte published a novel, Shirley, about a character which bears a striking resemblance to Emily.  I have often wondered whether the missing novel was autobiographical, or a tribute to Emily from Charlotte, or something else.  More about Shirley in future visits to the Brontë parsonage.

To me, Wuthering Heights is one of the finest Gothic novels of all time.  It has nearly everything a reader could want—love, betrayal, jealousy, revenge, ghosts, a haunted house, and lots of peculiar plot references.  The novel begins with a mixture of conflicting passages.  She writes in Lockwood’s diary, “1801—I have returned from a visit to my landlord—the solitary neighbor that I shall be troubled with.  This is certainly a beautiful country!  In all of England, I do not believe that I could have fixed on a situation so completely removed from the stir of society.  A perfect misanthropist’s heaven—and Mr. Heathcliff and I are such a suitable pair to divide the desolation between us.  A capital fellow! He little imagined how my heart warmed towards him when I beheld his black eyes withdraw so suspiciously under their brows, as I rode up and when his fingers sheltered themselves, with a jealous resolution, still further in his waistcoat, as I announced my name” (3).

The beginning of the novel is fraught with a set of images hard to overlook.  Including the name of the new tenant, Lockwood.  We also see a “gate,” which “manifested no sympathizing movement”; Lockwood’s horse was, “fairly pushing the barrier, but [Heathcliff] did not pull out his hand to unchain it” (3).  The novel delivers a healthy set of images, which set the mood.  She describes “storm weather,” “stunted firs,” “gaunt thorns,” a “bitch pointer surrounded by a swarm of squealing puppies, and other dogs haunted other recesses” (4-5).  Heathcliff is described as “a dark-skinned gypsy” (5). 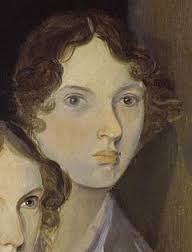 Heathcliff himself adds to the atmosphere, when a dog “provoked a long, guttural snarl” and “You’d better let the dog alone,” growled Mr. Heathcliff” (6).  Lockwood notes, “an obscure cushion full of something like cats.  What sort of creature might that be?”  Two lines later, we are treated to “a heap of dead rabbits” (9).  Then, “‘Get [dinner] ready, will you?’, uttered so savagely that I started.  The tone in which the words were said revealed a genuine bad nature.  I no longer felt inclined to call Heathcliff a capital fellow” (10).

Lockwood fastens his bedroom door.  “In vapid listlessness I leant my head against the window, and continued spelling over Catherine Earnshaw—Heathcliff—Linton, till my eyes closed; but they had not rested five minutes when a glare of white letters started from the dark, as vivid specters—the air swarmed with Catherine’s, and rousing myself to dispel the obtrusive name, I discovered my candle wick reclining on one of the antique volumes, and perfuming the place with an odour of roasted calf-kin” (15-16).  Emily Brontë’s Wuthering Heights will send chills up and down the spine.  5 stars.