I admit to a lack of interest in Neil Gaiman, but my book club chose Norse Mythology for last February's meeting.  It turns out I enjoyed this collection of Norse Sagas, despite a few anachronisms, which seemed forced in some of the tales.  A section of my graduate studies immersed me in the world of Beowulf.  Their battles and drinking mead and general carousing gave me many months of fascination.


According to the informative “Introduction, “The Norse myths are the myths of a chilly place, with long, long winter nights and endless summer days, myths of a people who did not entirely trust or even like their gods, although they respected and feared them.  As best as we can tell, the gods of Asgard came from Germany, spread into Scandinavia, and then out into the parts of the world dominated by the Vikings—into Orkney and Scotland, Ireland and the North of England—where the invaders left places named for Thor or Odin.  In English, the gods have left their names in our days of the week.  You can find Tyr, the one-handed (Odin’s son), Odin, Thor, and Frigg, the queen of the gods, in respectively, Tuesday, Wednesday, Thursday, and Friday” (12-13).

Favorite chapter is “The Mead of Poets.”  He asks, “Do you wonder where poetry comes from?  Where we get the songs we sing and the tales we tell?  Do you ever ask yourself how it is that some people can dream great, wise, beautiful dreams and pass those dreams on to the world, to be sung and retold as long as the sun rises and sets, as long as the moon will wax and wane?  Have you ever wondered why some people make beautiful songs and poems and tales, and some of us do not?” (127).  Then the story continues, “It is a long story, and it does no credit to anyone: there is murder in it, and trickery, lies and foolishness, seduction and pursuit.  Listen! // It began not long after the dawn of time, in a war between the gods: the Aesir fought the Vanir.  The Aesir were warlike gods of battle and conquest; the Vanir were softer, brother and sister gods and goddesses who made the soil fertile and the plants grow, but none the less powerful for that” (127).

Odin desired a secret stash of mead held by Suttung.  The tale continues, “Gunnlod, the daughter of Suttung, stood in the cavern in front of a locked door, behind which were the vats called Son and Bodn and the kettle Odrerir.  She held a sharp sword in her hands, and she sang to herself as she stood. // ‘Well met, brave maiden!’ said Odin. // Gunnlod stared at him.  ‘I do not know who you are,’ she said.  ‘Name yourself stranger, and tell me why I should let you live.  I am Gunnlod, guardian of this place’” (146). 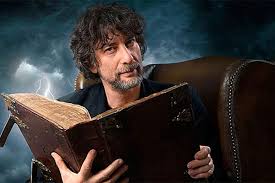 Gaiman refers to these people as “Vikings,” but my OED first lists the term in the early years of the 19th century.  They knew their ancestors as Norsemen.  Another item was the reference to “seconds” as passage of time (168), and a reference to “The world moved beneath him.  The wind blew about him.  He went even faster, so fast that the air itself boomed with the sound of his passing” (192).  I think this may end in an epic battle among the gods, which far exceeds the comic book heroes in my eyes!

Despite these minor annoyances, Neil Gaiman’s volume of Norse sagas proved highly entertaining.  Find a bottle of mead at your local beverage outlet and trace the journeys and adventures of these most interesting figures.  (4-1/2 Stars).