Margaret Atwood is one of my all-time favorite authors.  I once drove from Philadelphia to Boston for an opportunity to meet her, hear her speak, and gather some treasured inscriptions.  The line for signings was long, but I waited until the end to get as many of her books signed as I could.  At last, I made it to her desk, and she signed every one of my copies.  She was kind, gracious, and quite funny.  It was a day I will not soon forget.  The Heart Goes Last is another of her dystopian novels.

The first novel of hers I read was The Handmaid’s Tale.  It blew me away, and it was an early example of a novel I read and immediately started over from page 1.  When the newest film of the movie came out, I quickly forgot about an older version with Robert Duvall and Faye Dunaway.  I recently watched the new first and second seasons, and I hope the promised third will be out soon.  If you have not read the Handmaid’s Tale, do so as soon as possible.  This is a story that could easily be transformed into fact.

Stan and Charmaine have both lost their jobs.  The city is ravaged with chaos.  They are now living in their car.  The tension between the couple is intense.  They are also not getting along.  To make matters worse, they must constantly be on the alert for roving bands of criminals.  Atwood writes, “Sleeping in the car is cramped.  Being a third-hand Honda, it’s no palace to begin with.  If it was a van they’d have more room, but fat chance of affording one of those, even back when they thought they had money.  Stan says they’re lucky to have any car at all, which is true, but that luckiness doesn’t make the car any bigger. // Charmaine thinks Stan ought to sleep in the back because he needs more space—it would only be fair, he’s larger—but he has to be in the front in order to drive them away fast in an emergency.  He doesn’t trust Charmaine’s ability to function under those circumstances: he says she’d be too busy screaming to drive.  So Charmaine can have the more spacious back, though even so she has to curl up like a snail because she can’t exactly stretch out” (3).

Stan has a brother, Conor, who is something of a misfit.  He has been known to use drugs, and he was constantly getting into scrapes, for which he must turn to Stan to bail him out.  As they near “The Positron Project,” they are recruited for a walled community where they will be safe, given housing, clothing, food, in short, everything they could want.  Conor tells his brother about this scheme, and he desperately tries to convince Stan Positron is a dangerous cult.  They do not take Conor’s advice.  Stan does not trust his brother, and he and Charmaine sign up for housing. 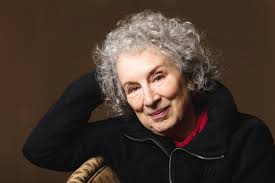 At first, everything seems as advertised, but there are some sinister and evil doings in Consilience, the town in which Stan and Charmaine now live.  As the couple immerse themselves into the cult, things become darker and darker.  But they soon discover there is no way out.  Then, Stan finds out there is an exit, but Stan trusts no one.  He believes it is a test, and becoming part of the plot could end in their deaths.  Margaret Atwood’s The Heart Goes Last is another addition to the swarm of dystopian novels worthy of this Booker Prize winning novelist.  This suspenseful story is another feather in Atwood’s impressive oeuvre.  5 Stars