Anne Hoffman is an author I admired back in the 80s, who has resurfaced on my radar.  Her latest novel, Faithful, has brought Anne Hoffman right back up into my reading life.  She was born in 1952, and she currently lives in Boston.  She is most well-known for Practical Magic, an Oprah Book Club Selection and is a best-selling author of over 30 works of fiction.  I read a couple of her novels around the millennium, but my usual vacuuming of the book lists has inexplicably passed by her.  She is most often noted for her magic realism, a sub-genre I really enjoy.

Faithful tells the story of two young women, BFFs as they say these days, who, while on a car ride, encounter a patch of ice which sends the care into a tailspin.  At first, the women are excited, but when the sliding stops, Helene Boyd is dead, and Shelby Richmond is seriously injured.  The two were a slightly odd pair.  Helene was the popular girl, the beautiful woman every man in their high school desired.  Shelby was slightly marginalized, but when Helene took her on as a friend, things changed for both young ladies.  Shelby suffers from survivor’s guilt, PTSD, and she cuts herself, and she is dangerously close to suicide.  A young man, Ben, befriends Shelby despite the fact she wants nothing and nobody, as she sinks further and further into depression.  At first, Shelby will not even talk to him.

Finally, she slowly relents.  Hoffman writes, “Whenever she talks about high school, Shelby takes out her house key and digs it into the palm of her hand until she bleeds.  No miracle.  That’s Helene’s business.  Shelby’s blood is strictly a penance.  It’s for real. // ‘I don’t think you should do that,’ Ben said to her when he realized what she was doing, drawing her own blood while she sat beside him. // ‘You think?’ she goaded him.  ‘That’s a surprise.  Did you know we used to think you were a werewolf?’ // Shelby guessed he’d stalk away, insulted, and maybe that’s what she wanted to happen.  Her aloneness, after all, is all she has.  Instead Ben said, ‘I’m just worried about you,’ // ‘Don’t be,’ Shelby warned him. // ‘I wouldn’t mind being a werewolf,’ he said, which only made Shelby feel guiltier about all those years they’d made fun of him” (8-9).

Shelby begins writing postcards to her future self, and then begins receiving others.  Hoffman writes, “She thinks about the anonymous postcards that she keeps in her childhood jewelry box.  Every day she waits even though sometimes there are months in between their arrivals.  When she sees one in the mailbox she feels a thrumming inside her.  She’s always excited to read them, no matter the message.  Be something, with a hive of bees made of gold ink and a girl who’s been stung running into a dark wood.  Feel something.  A heart held in the palm of a hand.  Inside the heart are words written in red ink: Faith, sorrow, shame, hope.  Someone is watching over her.  Someone knows what she needs” (28-29).  Then she begins hearing voices. 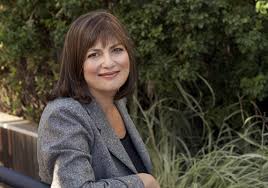 This suspenseful novel will have you turning pages faster than you might ever have done.  Alice Hoffman is a wonderful writer, and her latest novel, Faithful, might just be a author you have been waiting to cross your desk.  I, for one, am going to revisit those couple of novels of hers I own.  Stay tuned.  5 stars.