About a year and a half ago, I reviewed the splendid and tender novel, Our Souls at Night by Kent Haruf.  While on a reconnaissance mission to new and independent books stores in Florida, I came across four of his six novels.  The owner of the shop happened to be there and we talked about some authors she liked, and when she mentioned Haruf, I swept up the four missing works.  We will be spending a lot of time with the novels of the departed Kent Haruf over the next year.

I began with Plainsong, which now comes to you highly recommended.  Haruf provided an epitaph to the novel with this definition, “Plainsong—the unisonous vocal music used in the Christian church from the earliest times; and simple and unadorned melody or air.”  Plainsong is a perfect title for a perfect novel.

The story revolves around history teacher Tom Guthrie and his two young sons, Ike and Bobby; Victoria Robideaux, a teenager thrown out of her home by her mother; Maggie Jones is a colleague of Tom’s, and she decides to help Victoria; two bachelor ranchers, Raymond and Harold, who take Victoria into their home, and Ella, Tom’s wife, who suffers some psychological problems; and finally, the town of Holt itself.  All these characters live quiet lives trying to survive, while trying to bring others along with them.

Ella is living separately from Tom and the boys.  She decides to move to Denver to live with her sister.  Tom brings the boys for a visit with Ella before she leaves.  Haruf writes, [Ike and Bobby] climbed out of the pickup and walked one after the other up the sidewalk and knocked on the door and stood waiting without turning to look back at him, and then she opened the front door.  She had changed clothes since the afternoon and now she was wearing a handsome blue dress.  [Tom] thought she looked slim and pretty framed in the doorway.  She let them in and closed the door, and afterwards he drove up Chicago Avenue past the little houses set back from the street in their narrow lots, the lawns in front of them all brown with winter and the evening lights turned on inside the houses and people sitting down to dinner in the kitchens or watching the news on television in the front rooms, while in some of the houses some of the people too, he knew well, were already starting to argue in the back bedrooms” (118-119).

Ike and Bobby visit an elderly woman to collect the weekly newspaper money.  She intimidated the boys a bit, but they were polite.  On one such visit, Haruf wrote, “She shuffled into the next room and came back carrying a flat and ragged cardboard box, and set it on the table and removed the lid, then she showed them photographs that had been much-handled in the long afternoons and evenings of her solitary life, photpgraphs that had been lifted out and examined and returned to the black picture book album, the album itself of an old shape and style.  They were all of her son, Albert.  That’s him, she told them.  Her tobacco-stained finger pointed at one of the photographs.  That’s my son.  He died in the war.  In the Pacific” (149-150).  I once ran errands for an elderly woman who was bed ridden.  She chain-smoked as dug in her purse for a quarter. 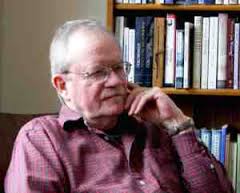 This story won’t make you cry.  It is the “comfort food” of reading.  Like the epithet, steady good people live their lives trying to help one another any way they can.  I can’t help being reminded of Thoreau’s note that “The mass of men lead lives of quiet desperation.  What is called resignation is confirmed desperation.”  I had a tough time putting this novel down when the door bell rang, or when I was called to dinner.  It is a quiet read for quiet times.  Plainsong by Kent Haruf is a novel you won’t soon forget.  5 stars.