All the Wind in the World by Samantha Mabry

The dust jacket reveals that Samantha Mabry teaches writing and Latino literature at a community college in Dallas.  All the Wind in the World is her second novel.  My admiration for products of Algonquin Books of Chapel Hill remains strong after reading this interesting story.

Sara Jac and James Holt have escaped from what appears to be Chicago in a dystopian nightmare.  Clues are scattered throughout the novel, indicating some catastrophe.  For example, Farrah asks Sara about trees in Chicago.  Maybry writes, “When I was there last, people from the cities were starting to come in and cut them down, but yeah, up until then there were lots of trees” (150).  Sara had a younger sister, Lane.  Mabry writes, “Lane and I had walked out of the girls’ home […] a couple of weeks earlier and were living on the street as thieves: always hungry, without home or direction.  It was the most alone I’d ever felt” (184).  She also writes of infrequent mail, the rarity of motor cars, lack of decent foot for the hard-working men, women, and children who harvest Maguey, a useful desert plant.

The prose is smooth and wonderfully filled with enough details to keep any reader busy through to the end.  Maybry writes, “People new to this part of the country sometimes describe it as barren, but that’s just them not looking hard enough.  Under the cracked surface, the fire ants swarm in a cool, dark empire.  Lizards and rattlesnakes emerge from the depths to warm themselves on hot rocks for the day.  The birds here—every last one of them black with oil-slick feathers—don’t fly so much as soar in perpetual circles, watching and waiting.  The creatures that live out here are smart and resilient; they have good instincts, they know when to strike and when to rest.  I tell myself that I should be more like them.  There is a sameness here in the desert, yes, but there are also treasures” (32-33).  The ranch James and Sarah work on is brutal—from the weather, the sand, the bees, and the ranch owner who is willing to hang a thief, or burn a murderer at the stake. 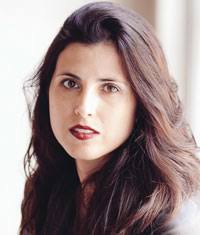 The ranch owner has two daughters, the youngest is Bell.  Sara is trying to teach her to ride a horse.  The older sister, Farrah, is ill and needs medical attention.  Mabry writes, “For a moment, neither of us says anything.  Farrah shifts her gaze over to the mountains and holds it there.  That first time I saw [Farrah] out in the maguey fields on [her horse] Britain I thought the expression on her face could best be described as haughty, and that she looked at the landscape like a proud, puffed-up owner would.  I thought she admired the desert and the terrain the same way I admired the small, collected treasures stuffed in my bandana.  Now, I’m not so sure that’s right.  The way she’s watching them, or looking beyond them, like she’s been waiting patiently for so long for someone or something to appear from their far side.  All of a sudden, I feel uncomfortable, as if I’ve stepped into a moment that’s not mine” (150).

All the Wind in the World by Samantha Mabry is a peculiar story of civilization slowly disintegrating.  Mabry has another novel, and I hope to get to it soon.  5 stars