Most of the time, I enjoy books suggested by club members at our annual summer meeting.  However, on those rare occasions I have some problem, I ignore the “Rule of 50” and slog on.  This time, I encountered an interesting story, but I found the point of view a bit annoying.  Fredrik Backman wrote an international bestseller, and his second novel, My Grandmother Asked Me to Tell You She’s Sorry, as another story all together.

The novel tells the story of seven-year-old Elsa, who is precocious to the extreme.  She is extremely close to her 77-year-old grandmother, who might politely be described as eccentric to the extreme.  Granny has constructed, through a series of stories, a mythical kingdom where everybody is different, and no one needs to be normal.  Then Granny dies.  Elsa is devastated, and she navigates the stages of grief quite well for one her age.  Else receives a letter from her Granny, who tells Elsa the last time they speak, that she is a night in the “Land-of-Almost-Awake,” and she must deliver a series of letters to a variety of individuals.  All this hides a terrible secret, which endangers Elsa.

My problem with the novel involves the narrator.  The man – I can’t help feeling the gender of this person – tries to speak with the voice of a 7 year old,, but, because he knows all the history, he cannot be anything but an adult.  Most of the time, I have no problem with omniscient narrators, but I found this one to be distracting and annoying.  I wish the book had been a memoir – written years later – by Elsa herself.

An interesting aspect of the story is the eclectic group of residents in the apartment building where Granny, Elsa, her mother, Ulrika, and her step-father, George, along with several other odd characters live.  One is called “The Monster,” who seems to be suffering from PTSD, and who has a large, fearsome dog.  Another resident is constantly drinking coffee, and another is a therapist, who suffers from agoraphobia.  Comic relief is provided by Britt-Marie, a woman who fancies herself as the manager of the block, but she also hides an unpleasant secret. 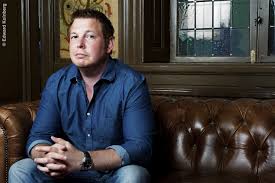 Backman writes, “The next morning both The Monster’s flat and the sellar storage unit are dark and empty.  George drives Elsa to school.  Mum has already gone to the hospital because, as usual, there’s some emergency going on there and it’s Mum’s job to sort out emergencies. // George talks about his protein bars the whole way.  He bought a whole box of them, he says, and now he can’t find them anywhere.  George likes talking about protein bars.  And various functional items.  Functional clothes and functional jogging shoes, for example.  George loves functions.  Elsa hopes no one ever invents protein bars with functions, because then George’s head will probably explode.  Not that Elsa would find that such a bad thing, but she imagines Mum would be upset about it, and there’d be an awful lot of cleaning.  George drops her off in the parking area after asking her one more time if she’s seen his missing protein bars.  She groans with boredom and jumps out” (111).

Now parts of this sound like a seven year old, the attitude might be that of a teenager, but the overall narrator is clearly an adult.  I guess I have a soft spot for grandmothers, because I continually ignored these annoying little things.  The end of the story ties up all the knots, and I found it rather pleasing.  I am sorely tempted to try Backman’s other novel, which is an international best seller.  In the mean time, My Grandmother Asked Me to Tell You She’s Sorry will have to do.  4-1/2 stars