The Lives of Elves by Muriel Barbery

I planned to begin reading Muriel Barbery’s latest novel, La vie des Elfes, after breakfast one morning.  I did not stop until I passed well over 100 pages.  I was enthralled.  My heart is firmly in the 19th century – George Eliot, the Brontës, Austin, Crandall, to name a few, so I love the detailed descriptions of landscapes, pastoral scenes, and peasants.  I felt those places when I read Elfes.  It is like a painting.  I see some figures, some color, some light, but it doesn’t move me.  Then I see Monet’s “Haystacks,” and I am driven to tears.  Likewise there are novels I enjoy, but every once in a great while, a real masterpiece comes along that moves me on so many levels.  This novel is one of those.  I hear the voices, the wind, and the raining beating on the thatched roofs.  This is no ordinary novel.

Muriel Barbery was born in Morrocco, but her family left for France when she was only two months old.  She studied there and received a certificate for entry into government service 1990.  In 1993, she taught Philosophy in several colleges.  She gave up teaching and lived for two years in Japan.  Muriel has written two previous novels, including the internationally renowned The Elegance of the Hedgehog.  She currently lives in Europe.

The Life of Elves is a lyrical, mesmerizing story of discord among living beings.  The war this launches upsets the balance of nature.  Two young women – one born in France and the other in Italy – possess magical powers.  The two children possess supernatural powers, which allow them to resist the encroaching army.  The Italian girl, Clara, possesses an extraordinary power to hear music and visualize the notes.  She learns to play the most complicated compositions with almost no training.  The Spanish girl, Maria, who later moves to France, is able to understand and communicate with nature.  As the children develop their talents, they are able to see, hear, and communicate with each other.

Barbery writes, “There was a fallow field, overgrown with sleek serried blades of grass, rising gently to meet the hill through a winding passage, until it reached a lovely stand of poplar trees rich with strawberries and a carpet of periwinkles where not so long ago every family was permitted to gather wood, and would commence with the sawing by first snowfall; alas that era is now gone, but it will not be spoken of today, be it due to sorrow or forgetfulness, or because at this hour the little girl is running to meet her destiny, holding tight to the giant paw of a wild boar.  // And this on the mildest autumn evening anyone had seen for many a year.  Folk had delayed putting their apples and pears to ripen on the wooden racks in the cellar, and all day long the air was streaked with insects inebriated with the finest orchard vintage.  There was a languidness in the air, and indolent sigh, a quiet certainty that things would never end, and while people went about their work as usual, without pause and without complaint, they took secret delight in this endless autumn as it told not to forget to love” (19-20).  The prose reminds me of a Monet canvas. 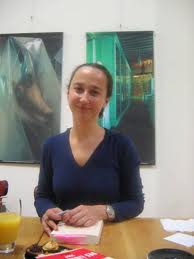 Throughout the novel, Barbery has sprinkled some wonderful moments.  For example, when Maria approaches a table “with three cloves of garlic and her glass [which] is an arrangement for the eye that pays tribute to the divine” (79).  She slightly moves one of the cloves.  Some pages later, Barbery explains, “The paths of fate: a garlic clove moved one millimeter and the world is utterly changed; the slightest shift disturbs the secret position of our emotions and yet it transforms our lives forever” (114).

The Life of Elves by Muriel Barbery will give the reader pause to stop – on almost every page – to consider her words, to wonder at the beauty and timelessness of her prose.  5 stars