Paris in Love by Eloisa James

One of my favorite cities in the world is Paris, France.  I made a number of trips there and always found it to be most enchanting.  When I came across a slim memoir, Paris in Love by Eloisa James, I could not resist despite the fact it is obviously directed at women.  The parts of the story involving women’s issues and shopping for haute couture, were sometimes funny, but the parts about food, cooking, and visiting art galleries and museums brought back many fond memories.  Eloise James is the pen name of Mary Bly, a tenured professor of English Literature at Fordham University.  She writes best-selling Regency romance novels under her pen name.


Eloise lost her mother to Cancer, and two years later, she received a diagnosis of the same disease.  She went through courses of surgery, radiation, and chemotherapy, and following an optimistic appraisal by her oncologist, she decided to take a sabbatical move her husband, Alessandro, son, Luca, and daughter, Anna to Paris for a year.  The memoir is set up in an interesting way.  She begins most chapters with short essays – which grow longer as the story progresses – followed by brief nuggets detailing their adventures.


One of the things I admire in the French is their tolerance for dogs in all aspects of society.  Here is one of those nuggets.  James Writes, “Last night we trotted out to our local Thai ‘gastronomique’ restaurant which means it’s a trifle more fancy than average and serves mango cocktails.  A man and his son came in, trailed by a very old, lame golden retriever.  The dog felt like lying down, legs straight out, in the middle of the aisle running down the restaurant – on a Friday night.  The waiter and all customers patiently stepped over and around him, over and over and over…Bravo, France!” (34).


Many of these nuggets involve the close attention to detail so necessary to a writer.  She writes, “Alessandro and I followed an exquisite pair of legs out of the Métro today.  They were clad in flowery black lace stockings and dark red pumps.  Their owner wore a coat with five buttons closing the back flap, and gloves that matched her pumps precisely.  We walked briskly up the steps, and I turned around to see the front of the coat, only to find that the lady in question was at least seventy.  She was both dignified and très chic.  Old age, à la parisienne!” (49).  At the end of the memoir, Eloisa comes to appreciate the way French women dress and act.  In fact, I think I might have seen that women several times in several places. 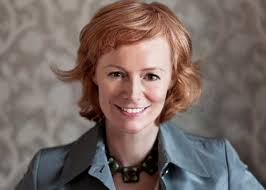 Another subject Eloisa attends to is literature.  It moves her as much as it moves me.  She writes, “Alessandro came in to check on me at one point, sympathetic about my cold but very disapproving when he realized my pile of soggy tissues was the result of tears rather than a virus.  ‘I never cry when I read,’ he pointed out, with perfect truth.  His nighttime reading, a biography of Catherine the Great, seemed unlikely tp generate tears, even from one susceptible to sentimentality as I.  His book didn’t seem like much fun, especially after I inquired about the one thing I knew about Catherine – to wit, her purported erotic encounters with equines – and he informed me that the empress was a misunderstood feminist whose sexual inventory, while copious, was nevertheless conservative.  Nothing to cry about there” (61).


All in all, I thoroughly enjoyed Eloisa James’ memoir, Paris in Love.  I especially liked the handy list of restaurants and museums she visited.  I plan on taking this book along on my next trip to the city of lights.  5 stars