The Vegetarian by Han Kang 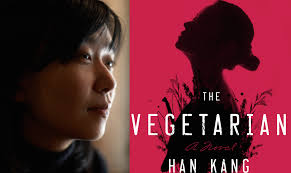 The Man Booker International Prize is an addendum to the Man Booker Prize awarded annually, my favorite literary award.  Han Kang has won the International prize given for fiction in translation.  According to the dust jacket, she was born in 1970 in South Korea.  She made her literary debut in 1993 with a collection of poetry.  Her first novel came out in 1994.  Han has won numerous literary awards, and she has participated in the Iowa Writers’ Workshop.  She currently teaches at the Seoul Institute of the Arts.

The Vegetarian is a harrowing story of a young woman’s journey away from her husband, her family by rejecting most of the expected customs of Korea.  The story is divided into three parts.  Part one focuses on Yeong-hye, the wife of Mr. Cheong.  She decides to become a vegetarian, and tosses in the garbage a substantial amount of meat, poultry, and fish.  In Part Two, her husband divorces her, and her sister’s husband – an artist struggling to find his way in the art world – convinces her to model for him.  In-hye finds her husband with Yeong-hye, and she divorces him.  Part three involves In-hye’s futile attempt to rescue her sister.

This chilling tale of an anorexic young woman and her struggle against the strict traditions of her family will fascinate while the horrifying nature of the prose is difficult to convey.  I am only slightly familiar with Korean customs and family dynamics, which seem strange – to say the least – in our more enlightened attitude toward women’s rights which are also human rights.  Saving face is an important element of the story.  Mr. Cheong describes his wife when Kang writes, “It wasn’t as though she had shapely breasts which might suit the ‘no-bra look.’  I would have preferred her to go around wearing one that was thickly padded, so that I could save face in front of my acquaintances” (13).  Later, the husband says, “I’d always liked my wife’s earthy vitality, the way she would catch cockroaches by smacking them with the palm of her hand,  She really had been the most ordinary woman in the world” (26).  Mr. Cheong also expects his wife to keep “quiet; after all, hadn’t women traditionally been expected to be demure and restrained?” (28).  Not since the 60s, I am afraid, Mr. Cheong.

Han Kang’s prose is spell-binding, and I could not imagine where his prize winning nove, <i>The Vegetarian</i>, tale was headed.