Between You & Me by Mary Norris

Believe it or not, I have a collection of The New Yorker magazine dating back to the early 1970s.  An English teacher I had in high school, recommended that I read the magazine to learn about all sorts of writing, and when I bought my first copy, it had a story by John Updike.  This worm on a hook captured me, and I began my first “author obsession.”  John Updike is gone, but I still read every issue nearly cover to cover.  When I heard of a book by a copy editor at the magazine, I could not resist adding to the lore of the fabled magazine now in its 92nd year.

Mary Norris—aka the Comma Queen—has written a thoroughly enjoyable tale of her adventures working for the pre-eminent magazine published today.  In a chapter titled “Spelling is for Weirdos,” she writes, “The English language is full of words that are just waiting to be misspelled, and the world is full of sticklers, ready to pounce.  Ours is not a phonetic language, like Italian and Spanish and Modern Greek, where certain letters and combinations of letter can be relied on to produce consistent sounds.  English has many silent letters.  And its motley origins make it fiendishly difficult to untangle.  Besides the Germanic roots of our Anglo-Saxon tongue and the influence of Latin (Emperor Hadrian) and French (the Norman Invasion), and borrowings from Greek and Italian and Portuguese and even a soupçon of Basque, American English has a lot of Dutch from early settlers in the East; plenty of Spanish, from the conquistadores and missionaries who explored the West; and a huge vocabulary of place-names from Native American languages, often blended with French, for added confusion” (17).  We native speakers of English treat our language as though it was a simple matter, but even good students can get tangled in is many webs vines. 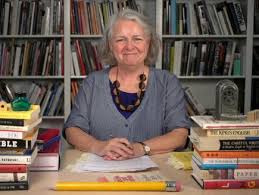 But my favorite chapter is “Ballad of a Pencil Junkie.”  I love writing with pencils much more than pens.  Every room has a discarded mug filled with pencils, which outnumber pens by at least 4-to-1.  Norris writes, “In the old days, at The New Yorker, when your pencil point got dull, you just tossed it aside and picked up a new one.  There was an office boy who came around in the morning with a tray of freshly sharpened wooden pencils.  And they were nice long ones—no stubs.  The boy held out his tray of pencils, and you scooped up a quiver of them.  It sounds like something out of a dream!  Even then I think I knew that the office boy and his tray would go the way of the ivory-billed woodpecker” (171).  Oh how warm and fuzzy it is to know there are others who share this innocuous obsession.

Norris has a preference for No. 1 pencils.  I have never used one—I prefer a sturdy German mechanical pencil for my pocket.  No. 2s are for all other tasks.  Norris writes, “Writing with a No. 2 pencil made me feel as if I had a hangover.  It created a distance between my hand and my brain, put me at a remove from the surface of the paper I was writing on.  I would throw it into a drawer” (172).

Mary also made an excursion to The Paul A. Johnson Pencil Sharpener Museum in Ohio.  The museum boasts 3,441 pencil sharpeners.  The rules for admission to this august temple of pencildom were set down by the founder. “each pencil sharpener had to be unique—no duplicates” however, “it could mean a sharpener was the same shape but a different color, or highly polished instead of dull” (180).  After completing her visit, Mary “went back to my car, found the pencil sharpener just where I had packed it, in a pocket of the zippered compartment on my backpack, and photographed it on the back of my car before shaking out all the shavings in the parking lot.  I did not want the fact that my sharpener was not a virgin to make it ineligible for display in the museum” (191).

Mary Norris’s delightful story, Between You  Me, is an antidote to all the other dark things we read, hear on the news, or read in the papers, I am not a serious punctuation freak—outside of an English Composition class—but I do enjoy catching an errant apostrophe here and there.  5 No. 2 Pencils!