The Heart is a Lonely Hunter by Carson McCullers

I dimly remember reading Carson McCullers The Heart is a Lonely Hunter around the time we were reading To Kill a Mockingbird.  At the least my current reading of McCullers reminds me of Harper Lee’s great novel.  Set in the days at the end of 1939, she recaptures all the difficulties at the tail end of the depression.  Inevitably, it also examines the Jim Crow era in the south.  This classic novel should be on everyone’s bookshelf.

According to the back cover, Carson McCullers was born in Columbus, Georgia in 1917.  She graduated from high school at 16, and began to pursue a dream of becoming a concert pianist.  Rheumatic fever cut short those hopes.  While in recovery, she became a voracious reader and decided to become a writer.  Carson wrote a total of nine novels, one of which was made into a play.  She died at the young age of fifty in New York.

The title of the novels tells all – the southern town is populated by characters who struggle with loneliness throughout their lives.  McCullers begins the novel with the appearance of Singer and Antonapoulos.  She writes, “In the town there were two mutes, and they were always together.  Early every morning they would come out from the house where they lived and walk arm in arm down the street to work.  The two friends were very different.  The one who always steered the way was an obese and dreamy Greek.  In the summer he would come out wearing a yellow or green polo shirt stuffed sloppily into his trousers in front and hanging loose behind.  When it was colder he wore over this a shapeless gray sweater.  His face was round and oily, with half closed eyelids and lips that curved in a gentle, stupid smile.  The other mute was tall.  His eyes had a quick, intelligent expression.  He was always immaculate and very soberly dressed” (3).  These two men carry a thread through the entire novel, and they affect a variety of characters in an almost exclusively positive way.

Mick Kelly a 16-year-old high school student, began to develop a strange attraction to the tall Mr. Singer.  She secretly followed him to work in the morning, and she waited for him after his work day ended.  She thought of him constantly.  Singer welcomed her into his apartment, where they played chess, listened to the radio, and talked about their lives.  Singer held up his end of the conversation with a silver pencil.  Everyone liked Mick and Singer, and several other people visited Singer for the same purposes.  Even an African-American Doctor had been partially abandoned by his children.  In one scene, he sits in a rocking chair in his empty house as his children try and move him into retirement. 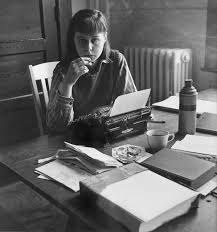 As any reader can imagine, all of the characters spend vast amounts of time reflecting on their lives, fretting about their future, or the impending war.  I frequently found myself deeply involved with these characters.  I wanted to sympathize, to advise, to help them.  Carson McCuller’s splendid novel, The Heart Is a Lonely Hunter, is anything but dull and depressing.  It is, however, a story which drew me into this town, the local bar, the doctor’s office, the apartment where Singer and Mick lived, and the quiet lives most of these characters experienced.  Be prepared.  The ending is startling.  5 stars