Finally, we arrive at the second installment of Joyce Carol Oates’ wonderful work, Soul at the White Heat: Obsession, Inspiration, and the Writing Life.  This section deals with a number of reviews written by Oates.  I carefully avoid reading reviews of books on my TBR piles.  I want my opinion completely unadulterated by other writers.  However, I really enjoy reading reviews, so I clip those of interest, file them away until I can read the book.  While a handful of reviewers attract my attention, none do more so than Joyce Carol Oates.

In Other Worlds: Margaret Atwood, Oates writes of her “eclectic and engaging miscellany of essays, reviews, introductions, and ‘tributes’ is a literary memoir tracing the myriad links between science fiction and literature” (210).  Embedded in this essay is a quote from Ursula K. Le Guin, another writer I admire.  Le Guin writes, “To my mind, The Handmaid’s Tale, Oryyx and Crake, and now The Year of the Flood all exemplify one of the things that science fiction does, which is to extrapolate imaginatively from current trends and events to a near-future that’s half prediction, half satire.  But Margaret Atwood doesn’t want any of her books to be called science fiction […] She doesn’t want the literary bigots to shove her into the literary ghetto” (211).  When I was in middle school, I discovered science fiction, and read as much as I could find.  My favorite was, and still is, A Fall of Moondust by Arthur C. Clarke.  I passed through that phase to another: archaeology, but I still do read the occasional SciFi novel.

Oates continues, “Both writers would describe their fictions as ‘thought-experiments’ – ways of describing ‘reality, the present world’ by way of original metaphors.  Both writers would argue that ‘a novelist’s business is lying’ – as a ‘devious method of truth-telling.’ // With the good-natured patience of a teacher who has made a point repeatedly, yet is still being misunderstood in some quarters” (211).

This is my favorite review in this section, and perhaps one of my favorites of all time.  This piece gives me the feeling I was at dinner with these three powerful women writers, and I sat there with a huge grin taking it all in.  I think it is important for readers – and reviewers – to read the work of other writers.  John Updike is another writer who has written hundreds of reviews.  He published no less than seven hefty volumes of essays, reviews, and criticism.  Lots can be learned from these volumes. 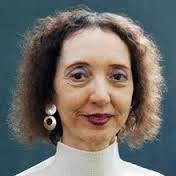 As a final sample from this collection, Oates writes in “Diminished Things: Anne Tyler,” another of my favorites to add to my obsessions.  She first quotes a poem by Robert Frost, “The Ovenbird.”  Oates then picks up the thread of the last line when she wrote, “’what to make of a diminished thing’ is a proposition that becomes ever more crucial with the passage of time in our lives, and particularly in the lives of writers who began young, with early successes and early fame.  Like her older contemporaries John Updike and Philip Roth, Anne Tyler has addressed this painful subject in recent novels, notably Noah’s Compass, Ladder of Years, and [The Beginner’s Goodbye]; but she addressed it in her characteristically minimalist, understated and modest way” (240).  Ah, another wonderful dinner conversation that would make.

So, we close this piece on a really important work for all readers and writers, Soul at the White Heat: Obsession, Inspiration, and the Writing Life by Joyce carol Oates.  I highly recommend this work.  Stay tuned for part three!  5 stars