Men without Women by Haruli Murakami

Haruki Murakami is one of the most interesting writers I have encountered over the last decade.  He tells interesting stories, and I always feel as though I am sitting in an easy chair as he spins another fantastic yarn.  His prose is simple and to the point. He uses ordinary language, and following his threads is always absorbing.  I have a hard time putting aside any of his stories regardless of length.  His latest novel, Men without Women is a case in point.


My first encounter with Murakami occurred when I came across a novel with an intriguing title: Kafka on the Shore.  Other equally fascinating titles are 1Q84, Norwegian Wood, and The Strange Library.  Men without Women belongs in this category to be admired, ruminated over, and reread.  His descriptions of characters reveal the deepest of emotions that a man can experience when he has lost a love, or a friend.  I find pieces of his puzzles fit nicely into my experiences.


This collection contains seven stories, and it is impossible to pick a favorite—they are all my favorites.  In “Drive My Car,” Kafuku hires a peculiar woman to act as his chauffeur.  Murakami writes, “Kafuku seldom drew distinctions between men and women in his daily life.  Nor was he apt to perceive any difference in ability between the sexes.  There were as many women as men in his line of work, and he actually felt more at ease working with women.  For the most part, women played closer attention to details, and they listened well.  The only problem occurred when he got in a car and found a woman beside him with her hands on the steering wheel.  That he found impossible to ignore.  Yet he had never voiced his opinion on the matter to anyone.  Somehow the topic seemed inappropriate” (5).  In the story, “An Independent Organ,” Mr. Tanimura plays squash with a doctor friend, who suddenly passed away.  Goto breaks the news to Tanimura.  Murakami writes, “As we were saying goodbye he said, ‘Mr Tanimura, I know this is an imposition, but I have a favor to ask.  Please remember Dr. Tokai.  He had such a pure heart.  I think that what we can do for those who’ve passed on is keep them in our memories as long as we can.  But it’s not as easy as it sounds.  I can’t just ask anyone to do that.” // You’re absolutely right, I told him.  Remembering someone for a long time is not as easy as people think.  I’ll try to remember him as long as I can, I promised.  I had no way to decide how pure Dr. Tokai’s heart really was, but it was true he was no ordinary person, and certainly someone worth remembering.  We shook hands and said goodbye” (111). 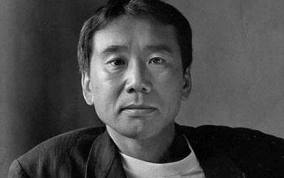 In the title story, “Men without Women,” a man was woken at one A.M.  Murakami writes, “A man’s low voice informed me that a woman had vanished from this world forever.  The voice belonged to the woman’s husband.  At least that is what he said.  And he went on.  ‘My wife committed suicide last Wednesday,’ he said.  ‘In any case, I thought I should let you know.  In any case.  As far as I could make out, there was not a drop of emotion in his voice.  It was like he was reading lines meant for a telegram, with barely any space at all between each word.  An announcement, pure and simple.  Unadorned reality.  Period” (212).

This fascinating collection of stories—Men without Women by Haruki Murakami—is a great introduction to Japanese literature.  5 stars.