I once asked John Updike – my favorite author – which writer influenced him the most.  He quickly answered, Henry Green.  I had never heard of this British writer, but I soon became an avid fan of his work.

Green was born near Tewkesbury, Gloucestershire, into an educated family with successful business interests.  His father was a wealthy landowner and industrialist.  Green attended Eton College, where he became friends with Anthony Powell and wrote his first novel, Blindness.  He studied at Oxford University, where he began a rivalry with Evelyn Waugh.  He left Oxford in 1926 without a degree and returned to his family business.  He began by working with the ordinary workers in his family’s factory.  His second novel, Living, came out in 1928.

After several more novels, Green published an autobiography Pack My Bag in 1940, and his last novel, Doting in 1952.  That was the end of his writing career.  He became reclusive and died in 1973.  Living, Loving, and Party Going were his most admired novels and are most often published in a single volume.


I have managed to collect all of his novels – except for one.  During a visit to one of my favorite used bookstores, The Old Tampa Book Store, I landed a copy of his 1948 novel, Concluding.  As I began reading the first page, I slid easily back into the world Henry Green created.  The interaction between the wealthy and the tenants is an unending source of entertainment.  Green writes in the opening paragraph, “Mr. Rock rose with a groan.  Crossing the open bedroom window he shone his torch light on the thick spectacles he wore.  He shone it up and down.  –It will be a fine day, a fine day in the end, he decided. // He looked down.  He clicked his light out.  He found there was just enough filtering through the mist which hung eighteen foot up and which did not descent to the ground, to make out Ted, his goose, about already, a dirty pallor, almost the same colour as Alice, the Persian cat, that kept herself dry where every blade of grass bore its dark, mist laden string of water.  –Old and deaf, half blind, Mr. Rock said about himself, the air raw in his throat.  Nevertheless, he saw plain how Ted was not ringed in by fog.  For the goose posed staring, head to one side, with a single eye, straight past the house, up into the fog bank which had made all the daylight deaf beneath, and beyond which, at some clear height, Mr. Rock knew there must be a flight of birds fast winging, --Ted knows where, he thought. // The old and famous man groaned again, shut the window,  He began to dress.  He put working clothes over the yellow woolen nightshirt.  The bedroom smelled stale, packed with books not one of which he had read in years.  He groaned a third time.  –Early morning comes hard on a man my age, he told himself for comfort, comes hard.  –How hard?  Oh, heavy.”  (5). 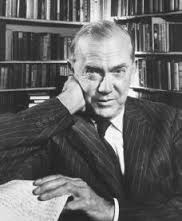 I can see the scene and smell the fog, as if I were beginning something by George Eliot – perhaps The Mill on the Floss.  As I finished these opening words, I knew Henry Green would not disappoint.


Oddly enough, none of Green’s novels sold more than 10,000 copies.  He was far more popular among writers than the reading public.  According to Wikipedia, Green has been referred to as a “Writer’s, writer’s, writer.”  His impressive list of admirers included John Updike, W.H. Auden, Christopher Isherwood, Eudora Welty, Anthony Burgess, and Rebecca West.  Start with the trio of Living, Loving, and Party Going, and work your way to Concluding.  I bet you will become an admirer of Henry Green, too.  5 stars