The Japanese Lover by Isabelle Allende

I have admired Isabel Allende ever since I saw the film The House of Spirits. I remember leaving the theater and almost running to the nearest bookstore to buy a copy of the novel. I now have read nine of her 21 works. I did not care for Daughter of Fortune, and I invoked the “Rule of Fifty.” Aphrodite – part memoir, part cookbook, and part love story – has always been my favorite. Until now, that is. Her latest novel is The Japanese Lover, which has all the things I most admire in Allende’s work: love, passion, food, secrets, history, the full range of senses, and even a bit of magic realism, all of which carry the reader along nicely.

According to her website, she has written 21 books, translated into 35 languages with more than 65 million copies. Isabel has received 14 international honorary doctorates, 50 awards from more than 15 countries. Two of her novels have been turned into internationally acclaimed movies. Her works have been adapted for movies, plays, musicals, operas, ballets, and radio programs. Beyond all this, she oversees The Isabel Allende Foundation, which empowers women and girls worldwide. She was born in Peru, raised in Chile, however, she now lives in California. In place of my usual biographical information, I offer a splendid paragraph by Allende about her “biography.” She wrote: “It is very strange to write one’s biography, because it is just a list of dates, events, and achievements. In reality, the most important things about my life happened in the secret chambers of my heart and have no place in a biography. My most significant achievements are not my books, but the love I share with a few people, especially my family, and the ways in which I have tried to help others. When I was young, I often felt desperate: so much pain in the world and so little I could do to alleviate it. But now I look back at my life and feel satisfied because few days went by without me at least trying to make a difference.” She has taken all her private dreams, hopes, desires, and placed them in her novels.

The Japanese Lover is a complex narrative of three families. The Belasco family, fabulously wealthy entrepreneurs, who lost many members of their family in the Holocaust; the Fukuda family of second generation Japanese, who, when swept up by the internment policy at the beginning of World War Two, lost everything except the friendship and love of the Belasco family; and, finally, Irina, a poor Romanian girl tricked into an escape plan, which turns out to be a front for human traffickers of children for the sex trade in Turkey. 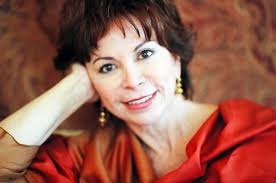 One of the characters, Irina, seemed at first to be only a minor figure in the novel. Allende writes, “Irina had grown up in a Moldovan village that was inhabited only by old people and children. She thought of her own grandparents and, as so often in recent years, regretted having abandoned them. Lark House gave her the opportunity to give to others what she hadn’t been able to give them, and she kept this in mind as she began looking after those in her care. She soon won the residents over, including several on the first level, the independent ones. // From the start, Alma Belasco had caught her attention” (9). Irina becomes the thread which ties the Belascos, the Fukadas, and herself together.

In a somewhat peculiar manner, Isabel Allende devotes each chapter to one of the main characters, but the omniscient narrator reveals all. The novel has little dialogue. I found this a bit off-putting, but, somehow, it all made sense in the last pages. I think time will show Isabel Allende has done her best writing in The Japanese Lover. 5 stars. --Chiron, 1/16/16
Posted by Chiron at 12:08 PM