Jeannine Hall Gailey was my mentor and model for poetry through my MFA. She liked my poetry, and I admired hers. She has recently published a collection of poems that deal with her childhood near the Oak Ridge National Laboratory (ORNL), birthplace of the nuclear age. She details the horrific side effects she, and the nearby residents, suffered as deadly poisons such as cesium, strontium, plutonium, and uranium turned plants, animals, crops, cow’s milk and even mud daubers into deadly vectors of those poisons, leading to cancer, leukemia, and whole host of physical ailments.

Jeannine served as the poet laureate of Redmond, Washington, and her poetry has appeared NPR’s Writer’s Almanac, The American Poetry Review, The Iowa Review, and Prairie Schooner. The Robot Scientist’s Daughter is her fourth collection of poems. She grew up near ORNL, where her father worked on robots to deal with nuclear waste. Her childhood home now lies under a gigantic concrete slab.

As we struggle to end reliance on fossil fuels for our energy, many advocated the construction of nuclear power plants as a substitute. No matter how safe, accidents can, do, and will occur. Even aside from those problems, the disposal of nuclear waste has not been settled to everyone’s satisfaction. Poetry is the perfect place to explicate these problems. The sadness and the emotion and the difficulties Jeannine experiences are a warning to us all. Gailey never plays on our fears, however. She handles her situation with grace and notes of caution.

I liked many of the poems in this collection, but one stood out for me among all my favorites. In graduate school, I briefly flirted with chaos theory as applied to literature. In her poem, “Chaos Theory,” she writes, “Elbow deep in the guts of tomatoes, / I hunted genes, pulling strand from strand. / DNA patterns bloomed like frost. Ordering / chaos was my father’s talisman; he hated./.imprecision, how in language the word./.is never exactly the thing itself. // He told us about the garden of the janitor / at the Fernald Superfund site, where mutations burgeoned / in the soil like fractal branching. The dahlias and tomatoes / he showed to my father, doubling and tripling in size / and variety, magentas, pinks, and reds so bright / they blinded, churning offspring gigantic and marvelous./.from that ground sick with uranium. The janitor smiled / proudly. My father nodded, unable to translate / for him the meaning of all this unnatural beauty. // In his mind he watched the man’s DNA unraveling, / patching itself together again with wobbling sentry / enzymes. When my father brought this story home, / he never mentioned the janitor’s slow death from radiation / poisoning only those roses, those tomatoes.” (33). 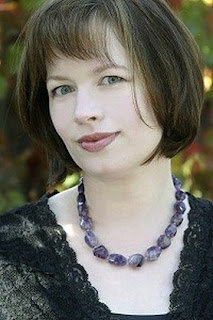 I can only hope that when we do free ourselves from fossil fuels, we do not insert deadly poisons into our land, sky, water, crops, animals, and our lungs. In his monumental work, Poetics, Aristotle wrote, “Poetry is something more philosophic and of graver import than history, since its statements are of the nature of universals, whereas those of history are singulars.” I believe this sums up Jeannine Hall Gailey’s latest collection, The Robot Scientist’s Daughter perfectly. She uses the “singular” event of poisoning our planet a cautionary for the widespread and deadly effects of nuclear power.

Take up some, or better yet all, of Gailey’s work, and perhaps you will have a different view of our world and the safety of our planet. 5 stars