Fates and Furies by Lauren Groff

When I first heard of this third novel by Lauren Groff, the hype surrounding its publication unfurled a mighty crimson flag.  Then my wife gifted me a copy for our anniversary, so I was now required to read this novel of a couple who meet in the final days before college graduation.  They instantly fall in love, marry, and begin a heated relationship with lots of twists and turns and blind alleys.  Once I started reading Fates and Furies by Lauren Groff, I could not turn away for more than a few minutes.  This is not a typical relationship novel.  Warning: this is a novel for mature audiences, and spoiler alert: they do not divorce.

Lancelot “Lotto” Satterwhite was a tall, somewhat handsome man chased by every woman he met.  He bedded most of them, but never for a second time.  Then he met Mathilde, also tall and a lot more attractive than Lotto.  Groff describes her as, “never unkind, but she wore her passive aggression like a second skin” (61).  Lotto acted in some college plays, and decided he wanted to be an actor.  Lotto’s father died when he was young, leaving a rather substantial fortune to him, his sister, Rachel, and his mother, Antoinette.  When he refuses to join the family business, she threatens to disinherit him, and does so when she discovers the marriage to a woman she suspects is only after his money.

The novel is divided into two parts, the first, “Fates,” has a narrator who tells the story of Lotto, and the second, “Furies,” the narrator focuses on Mathilde.  Groff also has a peculiar style – lots of sentence fragments and one word thoughts.  Early on, she writes, “A unity, marriage, made of discrete parts.  Lotto was loud and full of light; Mathilde, quiet, watchful.  Easy to believe that his was the better half, the one the one that set the tone.  It’s true that everything he’d lived so far had steadily built toward Mathilde.  That if his life had not prepared him for the moment she walked in, there would have been no them. // The drizzle thickened to drops.  They hurried across the last stretch of beach” (6).  After this brief scene, Groff switches to a parenthetical, [Suspend them there, in the mind’s eye: skinny, young, coming through dark toward warmth, flying over the cold sand and stone.  We will return to them.  For now, he’s the one we can’t look away from.  He is the shining one] (6). 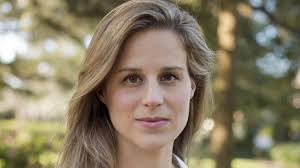 Some  parentheticals reveal information of use much further into the novel,  In these two sentences, we peer into Lotto’s future.  She writes, “Lotto’s formidable memory revealed itself when he was two years old, and Antoinette was gratified. [Dark gift; it would make him easy in all things, but lazy] (12).  Sometimes the narrator makes a self-correction.  “Good old [Robert] Frost, he thought.  The ones who said the world would end in ice were right. [Wrong.  Fire] (141).  As an actor, Lotto loved Shakespeare, and lots of references to plays are bandied about.  For example, passages from King Lear and one of my favorite lines from Much Ado About Nothing, “Some Cupid kills with arrows, some with traps” (60).

Lauren Groff’s suspenseful story of a couple deeply in love and struggling to make their way in the world, Fates and Furies will keep you captive for a long afternoon or two.  Keep the kettle on for this one!  5 stars.