The Girl on the Train by Margaret Hawkins

Paula Hawkins, a former journalist, has hit a home run with her first thriller, The Girl on the Train.  After some pretty intense reads, I was glad our book club chose this for the April read.  The story involves three women and two men.  Scott, is married to Megan, who has had affairs, and despite her husband’s forgiveness, she is on the prowl for another.  Tom is Rachel’s former husband, and her agony over the divorce has her spying on him and his new wife, Anna.  Scott and Megan live a few doors down from Tom and Anna.  When a train into London stops at a particular point each day, Rachel sees Scott and Megan in their back yard.  She creates a fantasy about this couple and their relationship.  Unfortunately, Rachel is slowly becoming an alcoholic, and her memories begin to blur.  Then Megan disappears, and the local constabulary gets involved.

One of the things I liked about this novel was a series of dead end clues.  For example, a pile of clothing on the train platform appears to have bloody stains, and a ginger-haired man who flirts with Rachel while on the train.  I followed one of those clues, but discarded it early on in the first 30 pages or so.  Oh, if I only had the courage of my conviction then and there, it would have been the best bit of detective work in my scant experience.  Rachel begins to fantasize about these things, while trying to connect them to the missing Megan.  The prose is so compelling, I began to feel as if these characters were all my friends, and they were sharing local gossip. 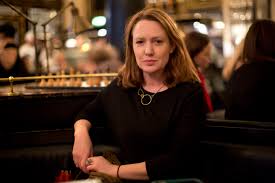 Each chapter has a character narrating his or her view of events over the period from Friday, July 5th to Tuesday, September 10, 2013.  Rachel attempts to deal with her drinking problem so she can remember and make sense of what she sees while on the train.  Hawkins writes, “I want a drink and I don’t want one, because if I don’t have a drink today then it’ll be three days, and I can’t remember the last time I stayed off for three days in a row.  There’s a taste of something else in my mouth, too, an old stubbornness.  There was a time when I had willpower, when I could run 10K before breakfast and subsist for weeks on thirteen hundred calories a day.  It was one of the things Tom loved about me, he said: my stubbornness, my strength.  I remember an argument, right at the end, when things were about as bad as they could be; he lost his temper with me.  ‘What happened to you, Rachel?’ he asked me.  ‘When did you become so weak?’ // I don’t know.  I don’t know where that strength went, I don’t remember losing it.  I think that over time it got chipped away, bit by bit, by life, by the living of it” (91).  Ironically, it is that strength and stubbornness which drives Rachel
to discover the who, what, when, where, why, and how of the lives of these people.  I guess we can adapt that often re-worded aphorism, “Once a journalist, always a journalist.”

I am not a big fan of mystery and suspense, but every so often, I catch one, which I enjoy.  I hope that won’t be catching.  The Girl on the Train by Paula Hawkins is a wonderful way to spend an afternoon or two in another glorious Texas spring.  5 stars