The Well by Elizabeth Jolley

I picked up this paperback of The Well, solely because Jolley is my better half’s maiden name.  It turned out to be a fortuitous choice.  Elizabeth Jolley is an interesting person.  She was born in England in 1923 into a strict German-speaking family and attended a Quaker boarding school.  She became a nurse, married, and after having three children, they moved to Australia when she was 36.  She wrote all her life, but it was not until she was in her 50s, did she gain widespread recognition.  She wrote 15 novels, along with six plays, and several works of non-fiction.  Elizabeth died in Australia in 2007.

A copy of one of her collections of short stories is in my library, but I read it so many years ago, I can barely remember any of them.  Her novel, The Well, won her the prestigious Miles Franklin.  The novel is a humorous look at “memory, desire and loneliness,” according to the publisher’s note on the back cover.

Miss Hester Harper is a wealthy, lonely woman, who, on a shopping trip to town, brings home an orphan, Katherine, and the two become close friends.  The tone of the novel is interesting from the first paragraph.  Jolley writes, “One night Miss Hester Harper and Katherine are driving home from a celebration, a party at the hotel in town, to which Miss Harper has been an unwilling guest.  Katherine had wanted very much to go to the party.  She is under the spell of a succession of film stars, the present one being John Travolta.  She tries to walk exactly as he walks.  Having seen every one of his films several times she is able to imagine herself, when dancing, as his chosen perpetual partner.  Miss Harper, unable to refuse Katherine Anything, has endured a long evening bearing at least two insults, one of these, because of the Peter Pan collar, laden with disturbing implication” (1).  When they leave the party, Katherine, a week before her driving test, insists on driving.  Hester is nervous, but she allows her to drive.  While careening down a narrow, winding road, Hester begs her to slow down, and then she hits something in the road.  The pair manages to drag the body to their isolated cottage, and dump it into an abandoned well. 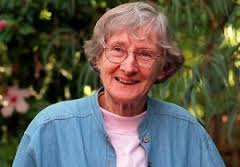 Mr. Bird manages the farm for Hester, and he urges her to be more careful with her inheritance, but Katherine convinces her to go on one shopping spree after another.  Hester keeps a huge portion of her money hidden in a sock drawer, much to Mr. Bird’s dismay.  When they return from the well, she finds her house ransacked and the money gone.

The story takes a suspenseful and morbid turn as Katherine believes she is talking to the man at the bottom of the well.  Hester never hears the man’s voice.  Katherine is convinced he is her prince charming, come to take her away to a castle where she will live happily ever after.  A reader can see many possible outcomes of this tale which bounces from suspense to humor, to the edge of pathos.  Elizabeth Jolley’s novel, The Well, reminds me of Poe’s story, “The Tell-Tale Heart” with a generous scoop of humor.  I do not know anything about any of her other novels, but I am going to delve into some soon.  5 stars.